"/> The fish the football chair & the faultless finish | Imagine

The fish, the football chair and the faultless finish

The pursuit of perfection – it’s the cornerstone of our business.

We’re constantly striving for perfection, but a recent project for a new client highlighted the time and effort required in order to achieve it!

The client was BetBright, an online gambling company who we had been recommended to by a very satisfied customer.

BetBright’s design brief was to create a bespoke exhibition stand that was interactive and appealing to visitors. They wanted a ‘fan-centric’ design inspired by the set of YouTube sports chat show, ‘Ball Street’.

Straightforward enough you may think, but glowing reviews like this don’t come easily…

“We worked with Imagine for the first time on our stand for LAC. From conceptualisation right through to delivery I couldn’t recommend them more. Adam was on the ground dealing with any issues that may have arisen so by the time the exhibit opened on the first day all we had to do was turn up. The stand was incredibly well received by everyone we spoke to and the show was a huge success, will certainly not be looking elsewhere for any stand requirements in the future.”

‘All we had to do was turn up’. We are particularly proud of that, because one of our USPs is that we take on every aspect of creating, designing and building our stands.

That means when our clients arrive on the day, there’s the illusion that a physical realisation of their original idea, has magically appeared as if from nowhere. If only that were true! Sadly we are not magicians, and the amount of behind-the-scenes work that went into realising BetBright’s vision is staggering.

Once we understood the client’s needs, we put our designers to work and came up with a concept that BetBright absolutely loved: a retro sports lounge complete with all the paraphernalia you would associate with it. This was the easy part. 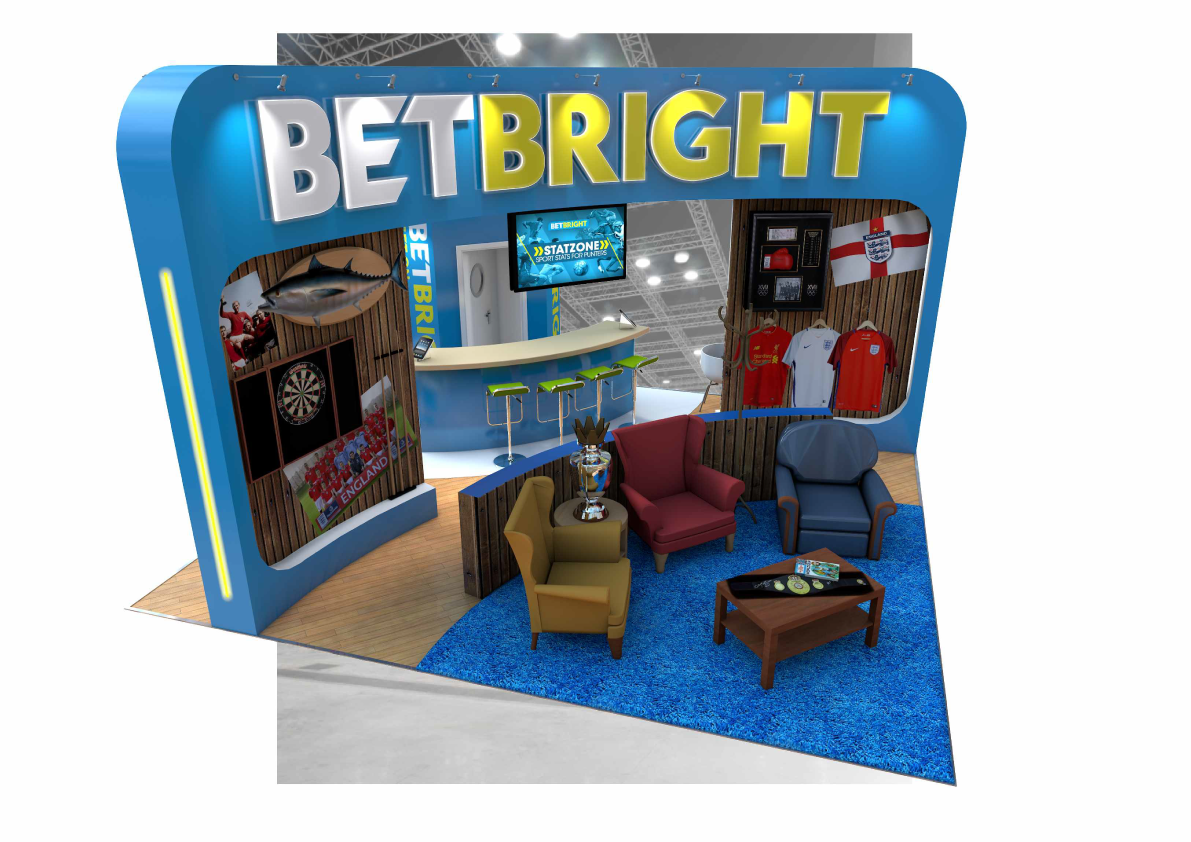 With the concept and design approved, we then faced the mammoth task of sourcing all the furniture and props to actually create the design. The shopping list was many and varied.

Hours and hours were spent trawling shops, Ebay, Gumtree and rental companies looking for the perfect furniture, and when we eventually stumbled across a pair of Queen Anne style armchairs that were a near perfect fit in shape and colour, we thought we were onto a winner. Just a nineties-style blue leather armchair and a fish mounted on a plaque to find.

Finding either, it seemed, was impossible.
But nothing is impossible when you think outside the box! After speaking to every fishing shop and fish taxidermist (yes, fish taxidermist!) in the country to find a mounted fish, we were left with no choice but to make our own. Which is how a cod fish pillow ended up the unlikely star of the show! 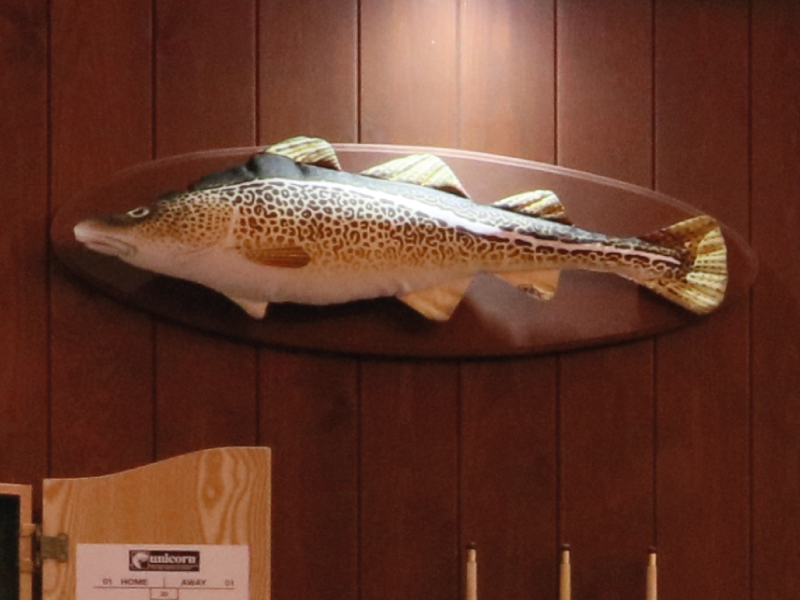 Onto the blue armchair which was still proving tricky. It turned out there were some available online, but we just missed out on buying them, in some cases by minutes.

Eventually though we got lucky, and bought the perfect blue armchair on Gumtree from a lovely lady called Barbara, who was thrilled when she heard what we wanted it for. The chair had belonged to her late father who, along with her brother were absolutely football mad! A happy ending for Barbara’s chair, but we weren’t at the finishing line yet.

After all the larger items were secured, then there were the tiny details to source, without which the look would have been lacking that certain something.

Football and boxing memorabilia, retro football shirts, trophies, sporting almanacs, all were meticulously traced, and on the day carefully placed. 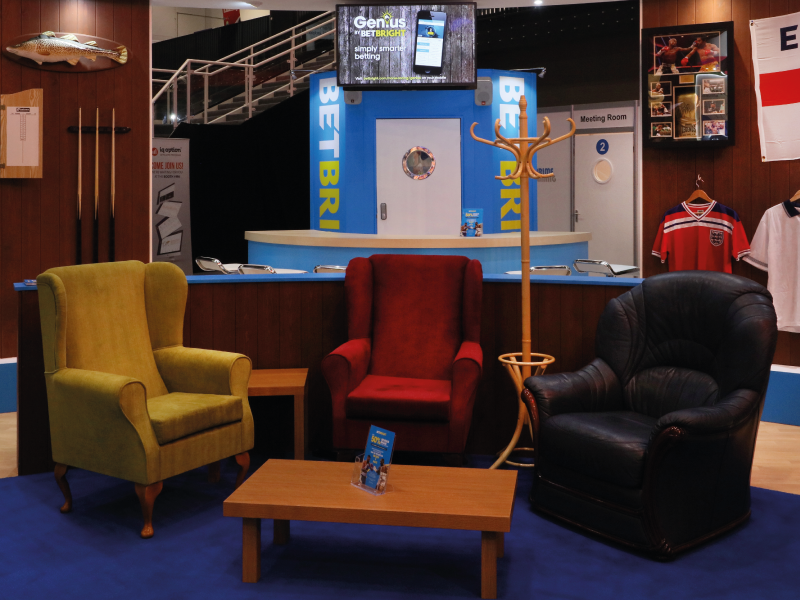 Doing all this on time and within budget was a huge challenge, but the results speak for themselves – a visually impactful bespoke exhibition design, created to the highest standards, and a very happy client.

BetBright were so impressed, they couldn’t fault it! And neither could the perfectionists in us! 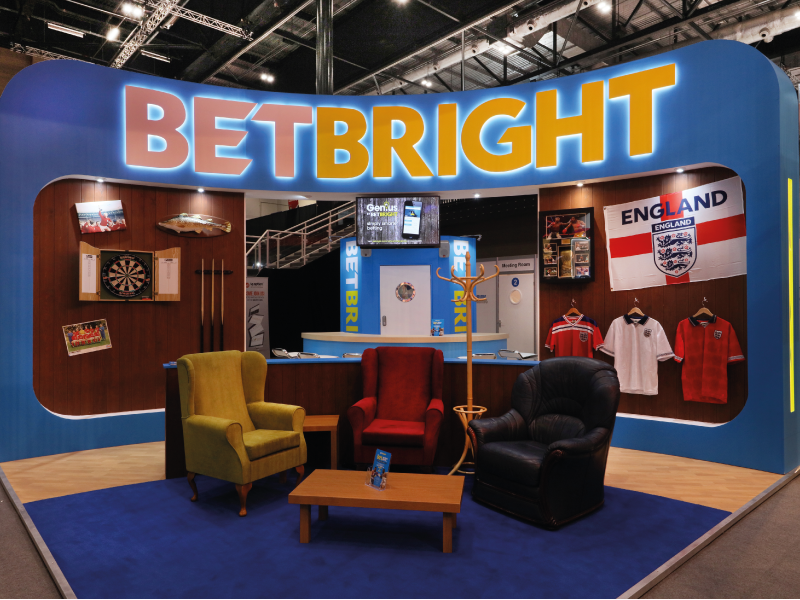 The moral of the story? Well, the cod fish pillow may be testament that nothing is ever truly perfect, but it won’t stop us trying! 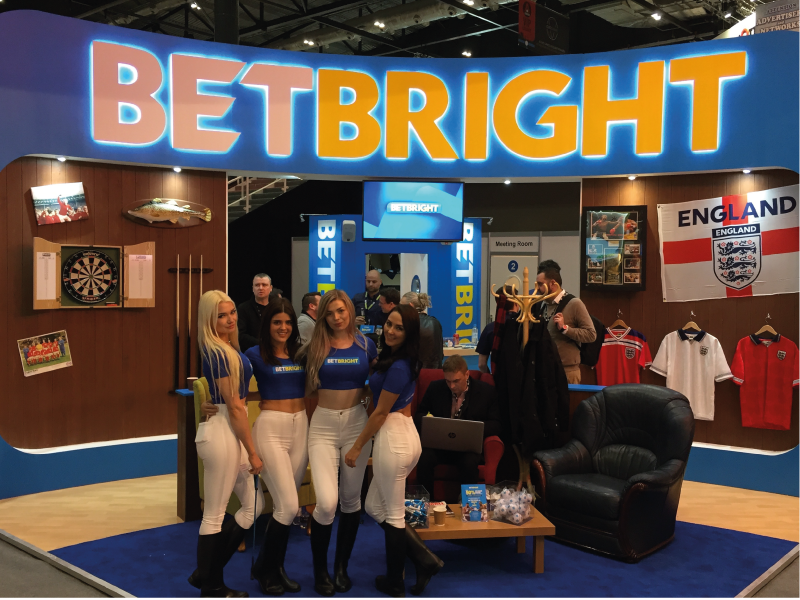